We are increasingly seeing the effects of climate change now. It is a wicked problem discussed in today’s top story, which proposes that researchers need to get better at explaining their findings. In other news, a leaked UN report warns that 2oC is much risker than 1.5oC, the human costs of climate change are examined, more evidence that indigenous people are the best at looking after forests, an interesting new theory on why life on Earth persists, and why urban planning needs to consider happiness.

How researchers can help the world face up to its ‘wicked’ problems | The Guardian
Sometimes, the sheer weight of the social, economic and environmental “wicked problems” in our world can leave us feeling frozen, unable to take any kind of action. But these are exactly the kinds of problems that researchers everywhere can help with – especially if we use methods that include and draw attention to the communities most affected by them.

Climate Weekly: 1.5C special report takes shape | Climate Home News
We came a step closer to answering that question this week, with the leaked draft summary of a UN special report on the target. It states more clearly than a previous version that 2C is “substantially” riskier than 1.5C. On the feasibility of meeting the tighter threshold, it drops the most sceptical language, while still highlighting significant obstacles.

UK heatwave helps solar power to record weekly highs | The Guardian
UK – Britain’s heatwave has helped break several solar power-generation records, and over the weekend the renewable energy source briefly eclipsed gas power stations as the UK’s top source of electricity. While new solar installations have virtually flatlined over the past year, a run of largely cloudless days has seen a series of highs for power generation by the sector.

Airlines eye massive carbon handout | Climate Home News
Airlines are cruising for weak climate action after their governing body on Wednesday deferred key decisions to implement its targets, campaigners warn. The aviation sector has committed to carbon-neutral growth from 2020, agreeing to “offset” extra emissions by paying for emissions cuts in other sectors. But negotiators at the International Civil Aviation Organization (Icao) may allow airlines to use a glut of old offsets to meet their quotas.

Scientists finally have an explanation for the ‘Gaia puzzle’ | The Conversation
We think we finally have an explanation for the Gaia hypothesis. The mechanism is “sequential selection”. In principle it’s very simple. As life emerges on a planet it begins to affect environmental conditions, and this can organise into stabilising states which act like a thermostat and tend to persist, or destabilising runaway states such as the snowball Earth events that nearly extinguished the beginnings of complex life more than 600m years ago.

Investing in indigenous communities is most efficient way to protect forests, report finds | Mongabay
A new report adds to the growing body of evidence that indigenous peoples are the best protectors of the forests they call home. The report compares conservation outcomes in lands controlled by indigenous groups against those in government-managed “protection zones” in 28 countries. The rate of deforestation on customary lands is half what it is elsewhere, the report finds.

Koala genome project reveals secrets about its toxic diet and disease | ABC News
AUSTRALIA – Munching on eucalypt leaves would kill most other mammals, but koalas have a large number of genes that enable them to tolerate their toxic diet. However, the same genes also play a role in making some drugs used to treat sick and injured animals almost useless. This double-edged sword is just one of the discoveries to come from an Australian-led project that has sequenced the entire koala genome. 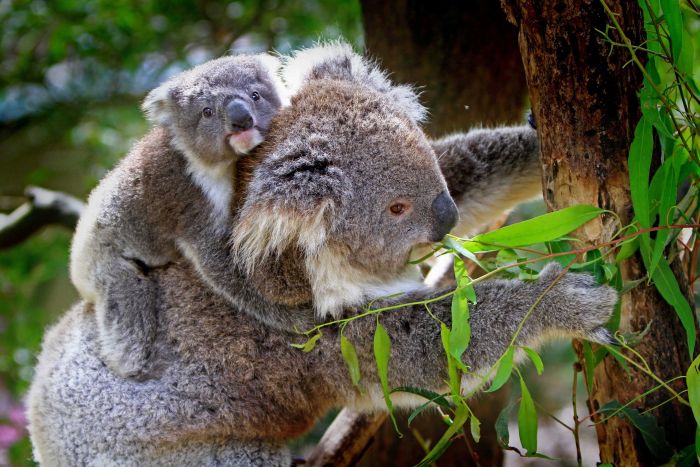 See also: Koalas sniff out juicy leaves and break down eucalypt toxins – it’s in their genome | The Conversation

Botanical life in close-up – in pictures | The Guardian
Colin Salter’s new book is a selection of extraordinary electron microscopic images of the plant world around us, including seeds, pollen, fruiting bodies, trees and leaves, flowers, vegetables and fruit. 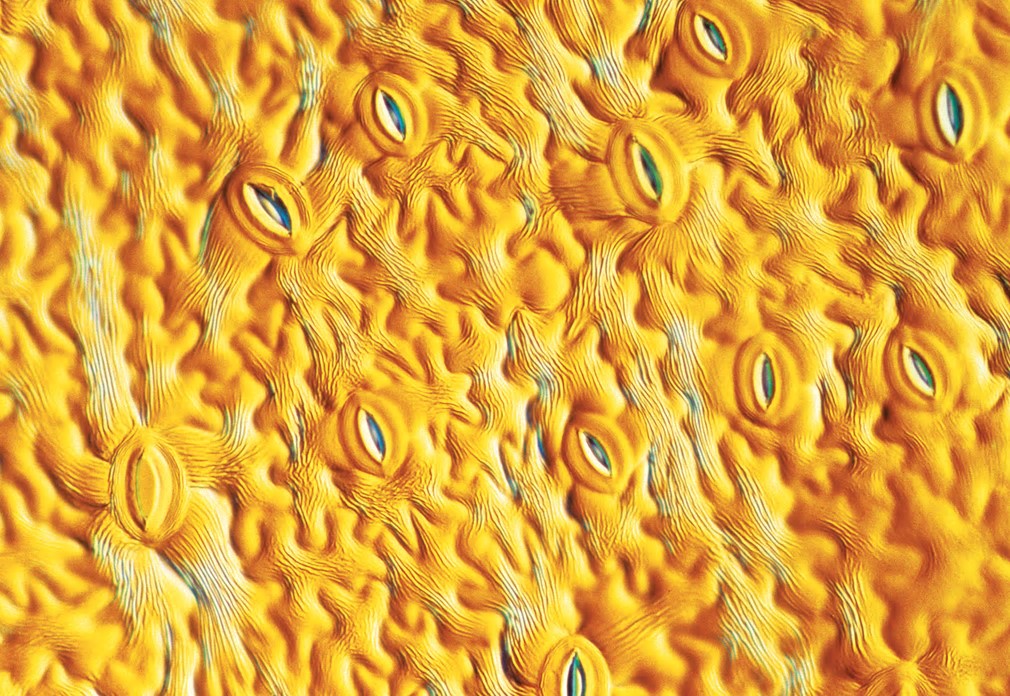 In this enhanced image the ‘mouths’ are the pores on the underside of an elder leaf. The ‘lips’ are the guard cells that expand and contract on either side, closing or opening the pores between them to permit the exchange of gases. During the day, plants give out oxygen as a byproduct of photosynthesis, and they breathe in carbon dioxide, their only source of carbon from which to grow new cells. At night they exhale carbon dioxide and inhale oxygen. Trees are truly the lungs of the planet. Photograph: Susumu Nishinaga/Science Photo Library

Bans on the sale of elephant ivory and rhino horn could be on the way | ABC News
AUSTRALIA – Items made of elephant ivory and rhinoceros horn are regularly, and legally, sold in Australia, but the Government is considering a change to the laws. The Australian Parliament is considering following the UK’s lead by banning the sale and purchase of ivory and horn within the country and is holding public hearings in Sydney and Melbourne this week.

Waste and the Circular Economy

Brisbane leads the nation with most businesses encouraging reusable coffee cup use | ABC News
AUSTRALIA – Coffee drinkers in Brisbane are leading the way nationally in reducing the amount of waste that ends up in landfill, according to a sustainability organisation. Responsible Cafes said 229 Brisbane City cafes have registered with the not-for-profit, which encourages businesses to offer incentives and discounts to customers who bring their own reusable cups. The City of Sydney had second highest proportion of cafes, with 151 registered businesses, and Melbourne City was third with 109.

State’s troubled recycling system receives $37 million rescue package | SMH
AUSTRALIA – Victoria’s beleaguered recycling system has been given a $37 million lifeline aimed at cutting the amount of recyclable material that ends up in landfill and turning more of the state’s waste into commercial products. It is hoped the plan, to be announced by the Andrews government on Tuesday, will reinvigorate the local recycling industry, which fell into decline after Australia began to ship more of its recyclable waste to China.

Litter survey providing insight into what, and how much, we’re throwing away | Stuff.co.nz
NEW ZEALAND – It’s hoped that knowledge will prove to be powerful when it comes to cracking down on Kiwis’ littering habits. Snack-food packaging, disposable drink containers and paper have been identified as the items most commonly disposed of incorrectly as part of the latest National Litter Survey, released on Monday.

Cardboard plant guards stem from daughter’s plastic question | Stuff.co.nz
NEW ZEALAND – A teenage environmentalist’s question sowed the seed for an invention to take plastic out of tree planting projects. Seedlings planted in ecological recovery operations are protected by plant guards, plastic sleeves held in place with bamboo or metal stakes around the plant.

Jan and Robert Fryer say their biodegradable plant guards are deceptively simple and break down to become “part of the environment”. Photo: Martin De Ruyter/ Stuff

The Human Cost of Climate Change | World Resources Institute
Home is a place of stability and security. It is a place where families come together to work towards and celebrate mutual prosperity. But as the human and economic toll of climate change continues to rise, we face legitimate risk of this sense of home being uprooted. Last year, devastating floods in South Asia took over 1,200 lives and affected over 20 million people, including 6.8 million children. With an estimated 18,000 schools destroyed or damaged throughout Bangladesh, India and Nepal, the education of hundreds of thousands of children is under threat, long after the waters have receded…

Look up #happycity and here’s what you’ll find | The Conversation
City planners and designers want to build cities that are liveable, healthy and smart. Yet, in the abundance of research and guidelines on how to make healthy cities, happiness seems to be missing. Research shows urban environments have an impact on our well-being and mental health, affect our behaviour and moods, interactions, day-to-day lives and even alter how our brain functions. Our recent study found people associate their happiness with particular natural and built elements in the environment. This highlights how we can improve the design of cities to enhance people’s happiness.

100 per cent renewable by 2020: GBCA’s bold plan for green buildings | The Fifth Estate
AUSTRALIA – In less than two years any commercial, institutional or government building wanting to get the top 6 Star Green Star rating could be required to source 100 per cent of its energy from renewables – either on-site or procured off-site – under sweeping changes proposed by the Green Building Council of Australia.

Ford taps EV expert to be new boss for Australia, NZ | RenewEconomy
US auto giant Ford Motor Company has signalled the start of a new chapter for its business in Australia, with the appointment of a global electric vehicle executive, Kay Hart, to head up operations Down Under.

Tesla finally hits Model 3 production target of 5,000 per week – hours after latest deadline | RenewEconomy
US electric vehicle maker Tesla has turned out 5,000 Model 3 sedans in the space of one week, meeting its long-promised production goal just hours after the company’s latest self-imposed deadline of midnight on Sunday.