Latest sustainable development news from Australia and around the world.
Sign up to the newsletter if you would like the news direct to your inbox each weekday morning.

Product Sustainability Jumps to the Next Level
Lifecycle analysis (LCA) has become a best practice tool that many companies use to analyze and improve the environmental performance of their products. It enables them to work out what the biggest impacts of a product are and where they occur in the process of creating and consuming it. A company can then focus on reducing those impacts and measure progress towards its goal. But sustainability metrics are evolving. A recent poll of more than 100 environmental managers, product designers and LCA practitioners conducted by Trucost reveals the limitations of LCA. Measuring impacts in physical terms such as tonnes of greenhouse gases or cubic meters of water used is becoming a first step towards creating more insightful and user-friendly metrics. Converting physical data to monetary values using natural capital valuation takes LCA to a whole new level.

What plummeting oil prices mean for renewable energy
The price of west Texas crude oil last week traded below $80 per barrel on the New York Mercantile Exchange for the first time in five years. Tuesday’s low of $75.84 per barrel was more than 25% below the prices of just this past summer. Oil’s slippery price slope could get even slipperier as winter approaches. It’s simple supply-and-demand economics: a worldwide slowdown in demand for oil, combined with the ongoing expansion of global production, thanks largely to aggressive extraction from US shale-rock formations, has sent the price of crude oil tumbling like a stone. But what about renewable energy markets? Will solar, wind and biomass buckle under the pressure of this low-priced petroleum glut?

Australia is losing ground as the climate policy race gains pace
Climate change, now belatedly added to the agenda for this month’s G20 meeting in Brisbane, is a perennial topic whenever leaders gather for international summits. That’s understandable, given that countries tend to have one eye on what others are doing to cut emissions. But host nation Australia, once one of the leaders on carbon policy, is now lagging behind the pack. The top dogs – China, the United States and the European Union – are tackling climate change, and in the process they’re leaving Australia looking like a pup, according to the latest Climate Council report.

Climate policy needs to look beyond 2020, says major report
A major report into climate change says Australia will need to substantially lift its carbon emission reduction target to 40 per cent by 2025 and is calling on political leaders to look beyond the short-term debate focused on the 2020 goal. And a second, separate study has found investment in renewable energy has fallen 70 per cent since the election of the Abbott government. The first study, by the Climate Institute, calls on the Australian government to announce an “independent, transparent” process for setting its post 2020 targets.

How the bacteria in our gut affect our cravings for food
We’ve long known that that the gut is responsible for digesting food and expelling the waste. More recently, we realised the gut has many more important functions and acts a type of mini-brain, affecting our mood and appetite. Now, new research suggests it might also play a role in our cravings for certain types of food.

Polar bears, sharks and other migratory species granted UN protection
Polar bears, whales, sharks and gazelles were among 31 new species granted new protection status by the UN conservation body, following six days of “intense” talks by leading conservationists. The UN Convention on the Conservation of Migratory Species of Wild Animals (CMS) said six days of “intense negotiations” led to new protection for scores of bird, fish and mammal migratory species.  A record 21 species of shark, ray and sawfish were added to the list.

Australia’s environment is ‘going backwards’, green alliance says
Almost half of Australia’s terrestrial ecosystems are threatened, 85 per cent of its rivers have been modified and twice as many Australians die from air pollution annually than road accidents, according to a report on the state of the country’s environment. “Every indicator is basically going backwards,” said Kelly O’Shanassy, chief executive of the Australian Conservation Foundation, one of 42 environment groups behind The Australia We Love report. “People love the Great Barrier Reef, the river they go for camping, or the beach – they don’t understand the pressures they are under,” Ms O’Shanassy said. “They are gradually dying.”

University professor says we should eat cane toads
An Australian university professor has suggested an unusual response to the endemic cane toad infestation in the nation’s north – we should eat them.  Professor Philip Hayward, of Southern Cross University, is set to tell a conference in Byron Bay about the economic and health benefits of munching the ubiquitous pests, the Courier Mail reports.

How refrigerants can deliver $10 billion a year in savings for the property sector
President of the Australian Refrigeration Association Tim Edwards believes the Australian property sector can reduce energy use by between 60 and 70 per cent and achieve savings in the order of $10 billion a year.  Mr Edwards is one of the presenters at this week’s National Energy Efficiency Conference in Sydney, and is also the key presenter for ARA’s upcoming Heating, Ventilation, Airconditioning and Refrigeration Energy Efficiency Seminar series in Melbourne, Brisbane and Sydney. The dramatic reduction in the sector’s footprint can be achieved through transition to natural refrigerants and improving overall building efficiency, including airconditioning plant upgrades and measures like high performance facades and reflective paints to reduce thermal heat load.

Mighty River to power car fleet with electricity
New Zealand’s renewable resources were lauded at a packed Mighty River Power meeting in Auckland as CEO Fraser Whineray invited shareholders to see electric cars as the path to energy independence. Unveiling a video presentation at the close of business, he described hydro power stations as “part of our taonga”.  The energy in new renewable power projects already consented was more than enough to drive all the country’s 2.8 million cars 12,000km a year, he said.  “Substituting electricity for petrol is a stunning opportunity for this country. Let’s take charge of home grown energy for New Zealand.”

Our kids need to learn about climate change
The conclusions published by the United Nations Intergovernmental Panel on Climate Change (IPCC) this week provide a wake-up call about the importance of teaching kids about sustainability. The IPCC’s dire warnings are based on new evidence just released on the impact of climate change. The findings signal the need for drastic action globally at all levels of society including among governments, businesses, communities and schools. This includes educating kids across all age groups and levels of schooling to prepare them to be able to live more sustainable lives.

No quick fix for overpopulation — let’s focus on climate
The rise in population since 1900 has been so rapid that up to 14% of all humans that have ever lived are still alive today, according to recent research. Other research shows that slowing population growth could provide between 16% and 29% of emissions reductions necessary by 2050 to avoid the effects of dangerous climate change, concluding “reduced population growth could make a significant contribution to global emissions reductions”. In a previous article, we argued that a decision to have children or not could be a vital part of climate policy, perhaps through a market-based mechanism similar to emissions trading. But a new paper casts doubt on our ability to make any meaningful dent in population growth.

Short-term political fixes pose threat to environment and future prosperity, scientists warn
Some of the nation’s top scientists have warned short-term political fixes pose a threat to both the environment and the nation’s future prosperity. The first major report in more than a decade from the influential Wentworth Group of Concerned Scientists suggests the Federal Government eliminate fossil fuel subsidies and provide tax breaks to landowners who work to protect threatened species and ecosystems. “We’re increasingly seeing the consequences of our current short-termism and the cost that will impose on this society in the future, because, in the long run, environmental degradation will come at an enormous cost,” Wentworth Group director, Peter Cosier, said.

Your brain on climate change: why the threat produces apathy, not action
Voter behavior has long held mysteries for both politicians and psychologists. Why do poor and working-class voters across the US South, for instance, still line up to support conservative candidates whose policies favor the rich, weaken the social-safety net and limit access to affordable health care? Some in the field of moral psychology have argued that national politics is “more like religion than it is like shopping”. Entrenched notions of cultural identity, in other words, can often be more motivating than short-term policy promises. But how to explain the paralyzing resistance to climate change action, where the risks approach existential peaks unseen in historical human experience?

Palm oil: the secret in your shopping basket – have your say
Take a look at the ingredients in household products from toothpaste and shampoo to chocolate and bread, and you’re likely to find palm oil – or one of the 200 different names applied to the vegetable oil – among them. It’s present in about 50% of what people buy from the supermarket. But where does this deeply controversial yet hidden ingredient come from? Our interactive tracks the journey of palm oil from the rainforests of Indonesia, Malaysia, and increasingly Latin America and Africa, to your kitchen cupboard.  It explores the complicated story of a commodity which has undeniably negative effects. Millions of hectares of virgin rainforest have been cleared in some of the world’s most biodiverse countries to make way for palm oil plantations. In the process people have been displaced, livelihoods undermined, endangered animals such as orangutans have lost their natural habitat and sometimes their lives, and the draining of peatland has released millions of tonnes of CO2 into the atmosphere exacerbating climate change. 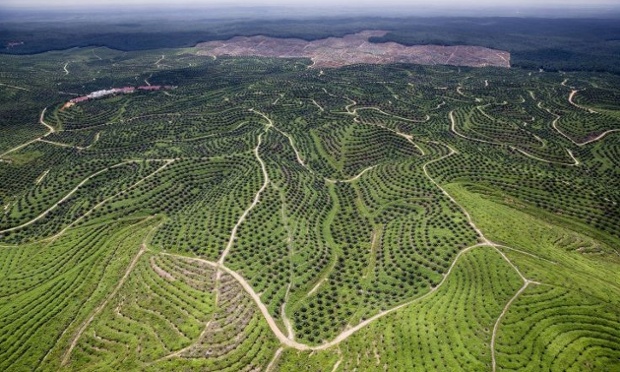 A palm oil plantation, in Riau province, Indonesia. Six million hectares of primary forest was lost in Indonesia between 2000 and 2012.

California’s strawberry industry is hooked on dangerous pesticides
Paul Helliker had a job for Dow AgroSciences. As director of the California Department of Pesticide Regulation, Helliker had allowed some growers to ignore the restrictions for a pesticide called 1,3-Dichloropropene, which the state believed caused cancer. The loophole was supposed to be temporary. Helliker gave Dow, the company that manufactures 1,3-D, and growers two years to come up with a plan to follow his department’s rules or to create new ones.  It took Dow less than a year to hand in its proposal. The company’s plan didn’t close the loophole, however. It greatly expanded it.

This site uses Akismet to reduce spam. Learn how your comment data is processed.